HE'S BACK YET AGAIN IN 2013, ALMOST ON CUE THIS TIME BLOWIN' SMOKE THAT HAS IGNITED INTO FLAMES. "HELL FREEZES OVER-FROZEN GORE!" - MARCH, 2013 - FAIRBANKS, ALASKA

WHAT IS FROZEN GORE? 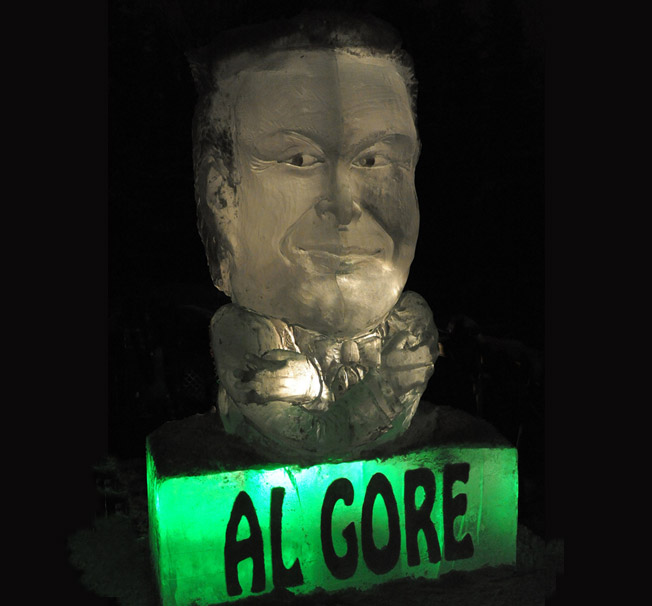 [ 26 Jan, 2009 ]
Commissioned in 2009, the shivering Al Gore sculpture was an 8 foot tall, 5000 lb block of ice that sat for months near the busiest intersection in Fairbanks Alaska as temperatures hovered near -40f. Fairbanks had recently experienced 87 consecutive days with temperatures that never broke above 20 degrees. Compeau contacted Gores office in Tennessee to invite him to debate the subject in Fairbanks , and suggested he arrive in a hybrid car vs his corporate jet Responding to his invite a couple days later, officials at Gore headquarters said that the former vice president would love to attend but apologized, stating a scheduling conflict. Compeau found the response humorous as he had never suggested a specific date or time.

[ 6 Jan, 2010 ]
Not to be outdone, Fairbanks businessmen Craig Compeau and Rudy Gavora upped the anti in 2010 with an even more elaborate and interactive Al Gore ice sculpture. The large sculpture sat atop a Ford V8 460 powered flatbed with the trucks exhaust piped through the throat of the sculpture. As the frozen exhaust belched from the mouth of the sculpture , loud speakers played excerpts of his Copenhagen speeches of his man-made global warming theories. Temperatures hit -42f during construction of the second Frozen Gore statue. An online contest added to the fun by inviting entrants to predict how long the Ford flatbed would have to run to equal the same carbon output as Gores corporate jet produced one his round trip flight from the US to Copenhagen. Gore again failed to accept an offer to debate his man-made global warming theories in Fairbanks. 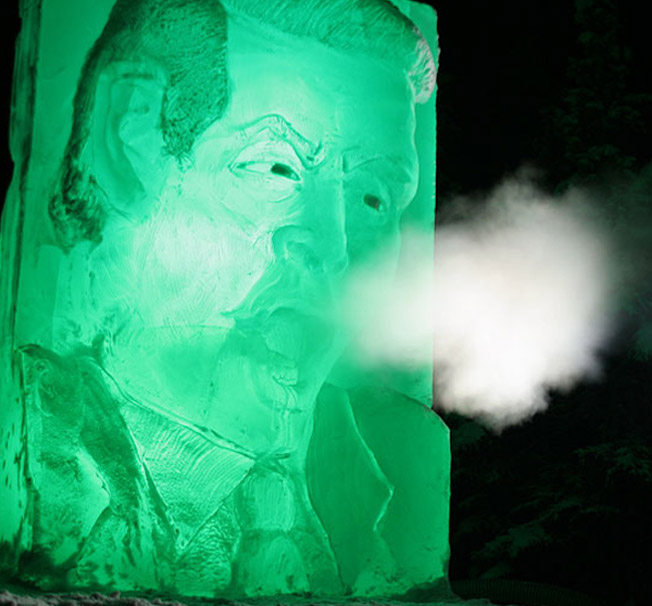 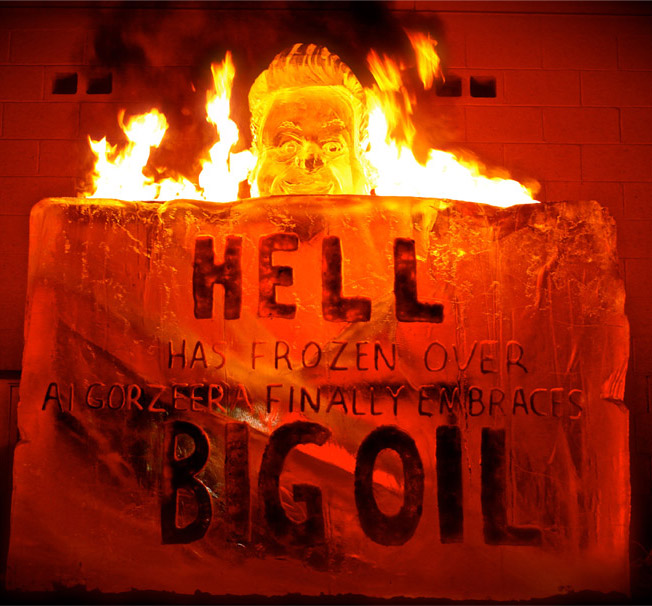 [ 11 mar, 2013 ]
After suggesting all along that Mr Gores motives were driven by profit and not a concern for The planet, Compeau and Gavora commissioned the third and final Frozen Gore Ice Sculpture in 2013. As diesel fuel slowly melted the block of frozen hell with the top of Gores head protruding from it, Gores true colors were finally revealed for all to see. In February, Gore sold his liberal network Current TV to Al jazzera for half a billion dollars. (Al jazzera is financed by the oil rich Emir of Quatar) Etched below the world renounced anti- oil, anti development, carbon trading zealot was the slogan that finally defined him eternally “Hell Finally Froze Over”. Al Gorzeera finally endorses Big Oil”
-Craig Compeau

Our last installment of the continuing saga of what has become known as Frozen Gore. Check out our video lighting the ice, and making some interesting refreshments.

Additional news story that made its way to national spotlight.